Jay grew up in New York, where playing with a 8mm movie camera in High School taught him to think visually and eventually led him to his career in video editing.

Now firmly transplanted in the Midwest he considers himself a dabbler with many diverse interests. He believes this mindset has served him and his clients well. His goal is to infuse each project with a unique approach.

Like George Harrison, Jay is considered the “quiet one” of our fab four editors. Over twenty years on varied projects has helped him recognize that listening carries the same value as talking. It also ensures his experienced opinion… sometimes you just have to ask for it. Don’t worry he won’t bite. It’s just his nature.

Jay is also aware of his limits… like writing this bio for example. He had one of our writers do it… uh, I mean… proofread it. He recognizes that he is an editor of compelling visuals and not complex vocabulary.

When not satisfying clients, Jay enjoys playing guitar, biking, and camping. He used to brew beer at home, but that’s on the backburner for now. Besides, his daughters aren’t old enough to fully appreciate that hobby. 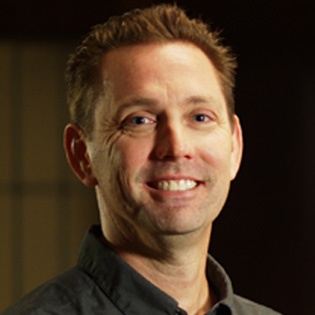 A carpenter is not just his hammer and saw. A chef is not just his ingredients. An editor is not just his hardware, software and a bunch of buttons. Compiling imagery and sound is truly a craft. I love the fact that everyday I get to combine the technical and creative. I never tire of using both sides of my brain to polish and finish a product. In addition, I enjoy the fact that I rely on a lifetime of experiences from both work and home to bring a project across the finish line. That’s why I love what I do.